In The Search For “Cougar Town” 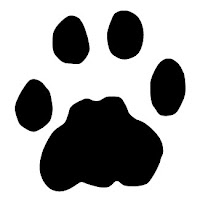 When does a woman become a cougar?
Abc is airing a new show called cougar town. The show stars former friends star Courtney Cox as a recently divorced single mother back on the dating scene. In my previous post "When do Women go the Prowl", I had Courtney in mind when describing how likely Women are to make the first move in a date. I first named this previous post "When does a Woman become Cougar" but a few readers pointed out that my definition of Cougar was not quite accurate. According to The Urban Dictionary, a more accepted definition is the following : "An older woman who frequents clubs in order to score with a younger man".

To better understand when women become Cougars, I pulled a new data-set of 100k online dates from speeddate.dating. The data is completely anonymous. What I consider to be valid dates are ones where both parties typed at least once. I computed the average age difference  in dates for women between the age of 18 and 61. The data is shown in the graph below. The Y axis represents the average age difference between the male and the female, the X axis the age of the female. It appears that, "on average", women start dating younger men at the age of 40, very close to the age when they start breaking the ice (shown in my previous post). 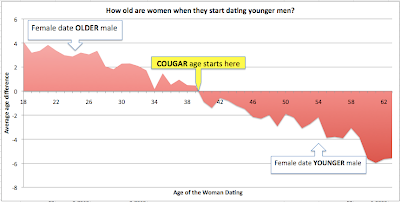 The fact that women in their 40s date younger people is not too surprising. What is worth noting however, is that this trend starts as early as 18 and never stops. Does this mean that women do not suddenly become Cougars at the age 40 but instead get more and more aggressive year after year?
Also, keep in mind that this is only an average, it does not necessarily describe the behavior of most women but, could instead be biased by a few outliers like Mrs Robinson who tend to date much younger men with an age difference sometimes beyond 20 years.
The second part of my "study" is focused on where in the U.S. you are more likely to date a cougar...
To answer this question I mapped my previous data-set with members' geographic information. I calculated the ratio of "cougar dates" : number of dates where the male is younger than the female divided by total number of dates, by state. Based on the results, it turns out that you're more likely to find a cougar in Nebraska or North Dakota than anywhere else in the US.

The Cougar heat-map of the United States. 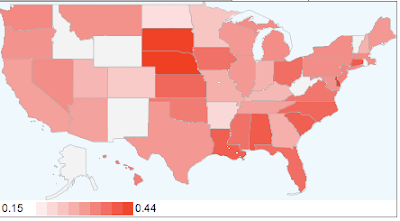 So in case you were wondering where The Cougar Town might be? The answer is somewhere in Nebraska!

When Do Women Go On the Prowl? 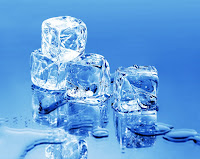 In a blind date, who breaks the Ice?

In our society it is still thought by many that “the man makes the first move” and recent data from SpeedDate confirms it, for most of the time...


Based on a recent data-set of a hundred thousand dates, we, at SpeedDate, found that in 78% of the dates, the male initiated the conversation. The sample reflects dates from SpeedDate users from around the world. 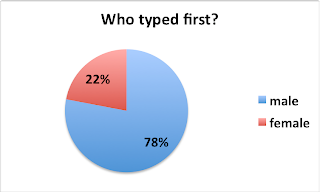 Who are the 22% women that did take the initiative? You can see the break down by age for “who typed first” below. 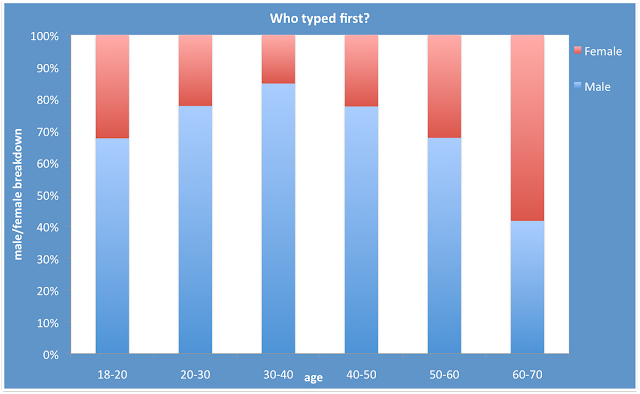 Ah-ha! That behavior does change quite a bit by age. It appears that women start to initiate the conversation/ “go on the prowl” at the age of 42. Perhaps most surprising of all is that after age 60, women are MORE likely than men to break the ice!


These findings can be interpreted in many different ways: hormonal changes, market dynamics, or possibly life expectancy.  Since women live longer, offers may drop over time with less same age or older soul-mates to choose from.

Another surprising observation stemming from the study is that women in their 20s are more likely to break the ice than those in their 30s. 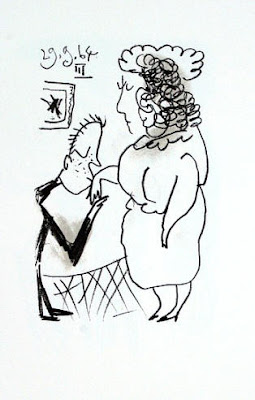 Thanks to speeddate.dating for the data.

A few words about speeddate.dating, the source of my data. speeddate.dating is an online dating site.
How is speedDate different from the other match.com and Eharmony?
I find dating similar to wine tasting. You can try to buy wine based on a few attributes : dry, sweet, carbernet, red, white, Chablis etc... but you'll never know if you like the wine until you taste it. Match.com will let you browse and search members based on their profile criteria. eharmony will try to find the perfect match based on a long questionnaire, the same way a doctor would diagnose a disease.
SpeedDate simply let you "taste" the wine right now! How? By letting you go on an online realtime 3 minute date (using chat or video conference), for free.

What Scents Drive You Crazy?

Be it to conquer the world or to conquer women (or men), chemists/alchemists have been looking for the magic potion from the beginning of the time.  Now the modern scientists give us some new clues.

For women, the smell of musk can keep the blood flowing, making them feel aroused.  This is why most of the cologne/perfume contain musk.

What about for men?  What drives them crazy?  A recent study by Dr. Alan Hirsch, founder of the Smell and Taste Treatment and Research Foundation in Chicago, and his colleague Dr. Jason Grussman gives us an very interesting list.  (The study is done by letting men smell different combination of scent and measuring the blood flow to their nether regions.)

Next time when you two have a romantic getaway, try rubbing some pumpkin pie on you?

And, what scents drive you crazy?  Care to share with us?

Being hot is being the average

Study has shown that the most attractive face is the average of the general population.  This is done by having test subjects identify the attractiveness of artificially generated images –   morphed together by averaging photos of many different people.

The earliest known experiment dates back to 2021, by Francis Galton, cousin of Charles Darwin.  Recent research in 2021 by imaging researcher Pierre Tourigny using photos on HotOrNot.com also shows similar results [Image on the left].   For a detailed explanation of the images, click here or here.

The averaged photos tend to cancel out blemishes, and balance the symmetry of the facial characteristics.  This is inline with a recent study where people finds symmetric faces to be more attractive.

An interesting article about kissing, and the science of it.  Thanks for sending this one in, A.

Are the good ones all taken?

Or is it because the taken ones appear to be good?

In a study, when single women are presented a photo of a man:

The same study also found that whether a woman is in a relationship does not affect men’s judgment on the attractiveness of the women.

Is your marriage making you healthier?

This is based on a study dated back to 2021, but stood the test of time.  It is intuitive that a happy marriage brings better health.  Hmm…., thinking of the previous post about “broken heart”, the downside of a happy marriage is when one of the partner dies, the person left behind will feel heart broken, and may have a good chance of a heart attack.

What is the feeling of a broken heart?

Have you ever had your heart broken?  — when you feel a tightness of the chest, stomachache, a loss of appetite, insomnia, anger, etc….

Heart broken has been long thought as a psychological condition.  But scientists found that these pains that you experience are indeed physical pains.  This is dubbed as “Heart Broken Syndrome”.

When you are under great stress, your brain could release “large amounts of catecholamines … into the blood stream, along with their breakdown products and small proteins produced by an excited nervous system.  These chemicals can be temporarily toxic to the heart, effectively stunning the muscle and producing symptoms similar to a typical heart attack, including chest pain, fluid in the lungs, shortness of breath and heart failure.”  — Study from John Hopkins Medicine. https://www.hopkinsmedicine.org/Press_releases/2005/02_10_05.html

Further more, scientists have come up with a measure for a broken heart. https://news.wustl.edu/news/Pages/7332.aspx

The good news is that you can recover from the Heart Broken Syndrome within two weeks.

“Better to have loved and lost than never have loved at all.” — Maybe not for those who have a weak heart.

Does your high school yearbook photo predict your marriage?

Study shows that people who have a genuine smile in their high school yearbook have a much lower divorce rate.  This seems like stating the obvious — happy people have a happier marriage — but nonetheless is an interesting read.

“Overall, the results indicate that people who frown in the photo are five times more likely to get a divorce than people who smile.”

The study was done for an older generation who has a proven marriage record.  For current generation, when the divorce rate (in the US) hovers around 50%, I wonder whether the difference is bigger or smaller between the smilers and the non-smilers.

A side note:
From Blink, the connection between your facial expression and your state of mind is a two way road.  When you are happy, you smile.  And when you artificially create a genuine smile, your mind actually feel happy.  This is a physiological reaction that can be tested with modern day instruments.